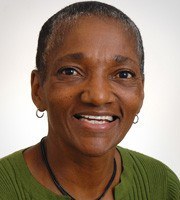 Dr. James has chaired and served on national committees within the Society for Academic Emergency Medicine (SAEM), served as a moderator, and has given public lectures and talks. She was appointed to the SAEM Women in Academic Emergency Medicine Task Force, is a member of the Boston University School of Medicine Admissions Committee, and in 2009, Dr. James was appointed to the Massachusetts Board of Registration in Medicine, where she presently serves as Chair of the Licensing Committee. Dr. James is the 2008 awardee of the David H. Mulligan Award for public service.

Dr. James’ passion is in Public Health both domestically and globally. She is a Supervising Medical Officer on the Boston Disaster Medical Assistance Team, under the Department of Health and Human Services, which has responded to several disasters in the United States and across the globe. She has deployed to post 9/11 in NYC, Hurricane Katrina in New Orleans in 2005, Bam, Iran after the earthquake in 2003, and Port-Au-Prince Haiti after the earthquake of 2010.

Debra Houry, MD, MPH, is the Director of the National Center for Injury Prevention and Control (NCIPC) at CDC. In this role, Dr. Houry leads innovative research and science-based programs to prevent injuries and violence and to reduce their consequences. She joined the CDC in October 2014. She has previously served as Vice-Chair and Associate Professor in the Department of Emergency Medicine at Emory University School of Medicine and as Associate Professor in the Departments of Behavioral Science and Health Education and in Environmental Health at the Rollins School of Public Health. Dr. Houry also served as an Attending Physician at Emory University Hospital and Grady Memorial Hospital and as the Director of Emory Center for Injury Control. Her prior research has focused on injury and violence prevention in addition to the interface between emergency medicine and public health, and the utility of preventative health interventions and screening for high-risk health behaviors. She has received several national awards for her work in the field of injury and violence prevention.

Dr. Houry received the first Linda Saltzman Memorial Intimate Partner Violence Researcher Award from the Institute on Violence, Abuse, and Trauma and the Academy of Women in Academic Emergency Medicine’s Researcher Award. She is past president of the Society for Academic Emergency Medicine, the Society for Advancement of Violence and Injury Research, and Emory University Senate. Dr. Houry has served on numerous other boards and committees within the field of injury and violence prevention. She has authored more than 90 peer-reviewed publications and book chapters on injury prevention and violence. Dr. Houry received her MD and MPH degrees from Tulane University and completed her residency training in emergency medicine at Denver Health Medical Center.