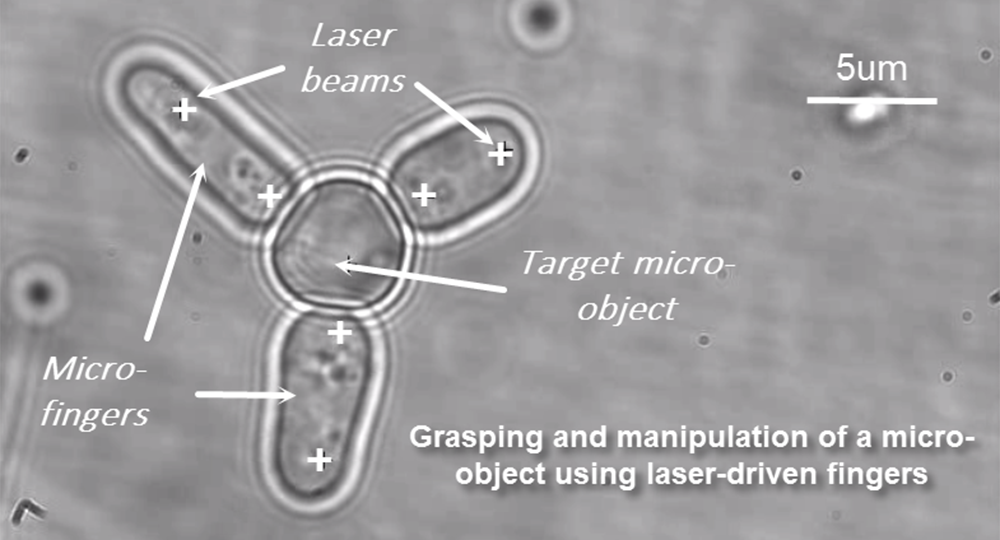 Micro-manipulation refers to manipulating of objects in the micro-world, including biological cells, micro/nano-particles. It has a wide range of applications in the research and development of clinical diagnosis, biological and pharmaceutical science, and micro/nano-technologies. However, the feasibility of current micro-manipulation systems is heavily dependent on the physical properties of the target micro-objects to be manipulated. Due to the limitations in sensing and actuations at micro-scale, it is also difficult to develop a micro-manipulator that is similar to a robot manipulator in the physical world. Therefore, unlike a human hand which can manipulate any object easily and skillfully, current micro-manipulators can only be used for very simple and limited manipulation tasks.

In this technology, a novel micro multi-fingered manipulation system will be developed to demonstrate the feasibility of dexterous manipulation in the micro-world. The research shall bridge the gap between dexterous robotic manipulation techniques in the macro and micro worlds. The proposed manipulation system consists of several micro-fingers which are developed using a 3-D micro-fabrication technique. These micro-fingers are then optically trapped and driven by using multiple laser beams to achieve collaborated operations. The laser-driven micro-fingers are therefore functioned as a multi-fingered hand to perform various dexterous manipulation tasks in the micro-world, including grasping, rotating, moving, and even rolling or pinching of micro-objects.

The usage of laser-driven fingers for manipulation of micro-objects can solve existing problems and limitations in current micro-manipulation techniques.

Firstly, it is able to adapt to variations of the target micro-objects, or manipulate micro-objects of arbitrary types in the micro-world. Micro-objects made of various materials can thus be grasped and manipulated in a similar manner as human hands and robotic manipulators in the physical world.

Secondly, since each laser-driven finger has three degrees of freedom, a system of coordinated fingers is thus able to perform dexterous or skillful manipulation tasks in the micro-world, including grasping, rotating, and even rolling or pinching of micro-objects. Besides, as the fingers can be manufactured to be arbitrarily small, dexterous manipulation on micro-objects of relatively small sizes (few micrometers or less) can also performed.

With a wide range of applications in biological science and micro/nano-technologies, manipulation of biological cells or micro-objects has received considerable attention in recent years. A technique that can solve existing problems and limitations in micro-manipulation may thus attract strong interest from researchers and practitioners. Hence, there is a demand for manufacturers or research institutions to use or apply the invented technique in their research and manufacturing processes.

Currently, most of the clinical research and clinical trials are performed manually by human. The current manual operations are time-consuming, or difficult to achieve due to the existence of Brownian perturbations. The ability to manipulate biological cells and micro-objects automatically and precisely is crucial towards automation of biological and pharmaceutical manufacturing processes. While robotic manipulation systems have been extensively studied and applied in factory automation, it is still difficult to automate the manufacturing processes at micro-scale due to various difficulties.

The development of a dexterous robotic manipulation technique that is able to pick and manipulate various types of micro-objects, therefore would thus initiate a breakthrough towards robotic dexterous manipulation in the micro-world, and lead to the automation of various biological and pharmaceutical manufacturing processes.